One ticket sold in Spain matched the five main numbers and two Lucky Stars to win the jackpot in last night’s draw. Furthermore, the winning ticket was the only one across Europe that managed to successfully match the winning combination required to take home the £29,815,964 / €37,632,166 prize! In addition to this, one ticket went on to win the entire second tier prize of €1,021,863.30 for matching the five main numbers and one Lucky Star. A detailed prize breakdown for this draw can be found at www.euro-millions.com.

The next estimated jackpot for Friday’s EuroMillions draw is £11 million including the UK Millionaire Raffle, which guarantees one player in the UK will win £1 million!

The jackpot for this draw was won by a single ticket that was sold in Spain. The lucky ticket holder (or holders) successfully matched the five main numbers and both Lucky Stars draw to scoop the £109,589,905 / €137,313,501 prize! There were no UK winners of the second tier prize, however there was one player that won a guaranteed £1 million in the UK Millionaire Raffle.

As the jackpot was won in Friday’s draw, it has now reset to £12 / €15 million for Tuesday’s draw, including a guaranteed UK Millionaire.

The EuroMillions jackpot for Tuesday’s draw was reset to the standard £12 million, after Neil Trotter won the previous draw’s £107.9 million jackpot by successfully matching all five Main Numbers and both Lucky Stars, but did anyone across Europe manage to strike it lucky in last night’s draw? Here are the EuroMillions results for Tuesday 18th March: 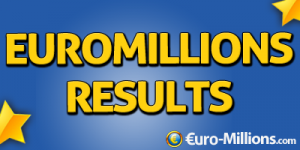 The full result and prize breakdown for this draw can be found at www.euro-millions.com.

While there were no ticket holders that won the jackpot in last night’s draw, there were four lucky EuroMillions players that managed to match all five Main Numbers and one of the two Lucky Stars to win £181,079.90 (€253,982) each! In total for this draw, over 1.5 million players across Europe won prizes that started from £3 for matching just two Main Numbers.

As there were no top prize winners in the 18/03/2014 draw, the jackpot for Friday’s EuroMillions draw is a Rollover at an estimated £20 million (€24 million).